In May 2014, the NSW Food Authority released a document “Artificial colours in local and imported food products”. This document reports on 2 surveys on artificial colours in food products. This was in response to consumer complaints of labelling statements on some products like “Not for sale in Australia and Indonesia” or “For sale in Indonesia only”. There is a practice of importing identically branded products from overseas that are also made in Australia, called “parallel imports”. Although this practice is not illegal, the concern is that these “identical” imported products are not manufactured to the same Australian safely standards.

Between August 2010 and August 2012, a total of 321 imported confectionary items and 105 Australian manufactured and imported sauces were tested. The products were analysed for the presence of artificial colours and the results were compared to the product labels. The two surveys focused on fifteen artificial colours, thirteen approved in confectionery and twelve approved in sauces and pastes.

The report acknowledged “The population at most risk are children aged between 2-5 years old, due to their low body weight and age artificial colours in large quantities may cause adverse reactions. Samples that were found to be exceeding the maximum level may also cause reactions to sensitive populations who consume these products.” 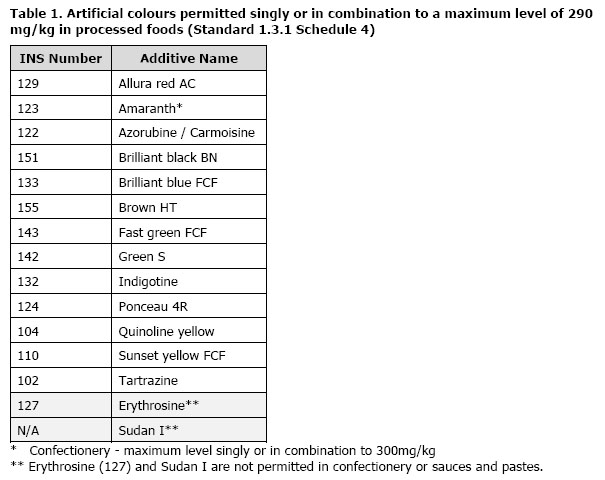 For a more comprehensive survey of the use of artificial colours in Australian products see the 2008 Food Standards Australia New Zealand report:

Survey of Added Colours in Foods Available in Australia.

One of the criticisms of this report is that it bases its consumption figures on data from the National Nutrition Survey which was published in 1995! There have been a huge number of food products released in the 13 years since that survey. Also keep in mind that yet another 7 years on (over 20 years now) the consumption of these products has significantly escalated. Just have a look at how many different Tim Tam varieties are taking up space on supermarket shelves.