Parents that have a child diagnosed with Attention Deficit Disorder or Attention Deficit Hyperactivity Disorder (ADHD), often look for alternatives to medication. Although food sensitivities, sleep, lead exposure, low iron, omega-3 and other nutritional deficiencies are the “core” treatment options, herbal medicine has not had the same prominence. There are specific herbs that can improve attention and memory, as well as irritability, mental fatigue, and mood swings.

Increasing numbers of children are being diagnosed with ADHD and being prescribed stimulant medications (like Ritalin). Although medication can help, many children struggle with the side effects of medication. These include decreased appetite, difficulty sleeping, dizziness, cardiovascular and digestive issues. Some children initially benefit, but often this initial benefit slowly diminishes, requiring higher medication doses or introduction of an additional drug. Some don’t show any improvement at all. Hence, parents look for alternative options.

So what about herbal supplements? Is there any research?

The research as expected is sparse, but it is available. Matching the patient to the most appropriate herbal remedy requires an experienced practitioner. This article will explore some of the herbs that can form part of a complementary treatment strategy for ADHD.

Lemon balm or Melissa officinalis, has traditionally been used for insomnia, anxiety, irritability and intestinal complaints. Lemon balm contains a number of active constituents responsible for its anxiolytic, calming and mild sedative effects. The rosmarinic acid content of the herb inhibits the enzyme GABA transaminase, which is responsible for the anxiolytic and calming effects of lemon balm. For this reason, lemon balm is used to help relieve stress and improve concentration.

As it is known to improve mental performance, attention span and memory in children. It also helps to relieve anxiety, restlessness and impatience. As it has a pleasant taste, it is an ideal herb to use in ADHD children.

A herbal formula which consisted primarily of lemon balm was evaluated in one ADHD study. The study concluded:

“The treatment group showed substantial, statistically significant improvement in the 4 subscales and overall TOVA [Test of Variables of Attention] scores, compared with no improvement in the control group, which persisted in an intention-to-treat analysis.”

Passion flower, or Passiflora incarnata, has been found to provide the same therapeutic benefits for anxiety disorders as oxazepam, a known anxiolytic, with fewer side effects. Passion flower has a strong tradition of use in sleep disorders, excitability and irritability. The chemical constituents in passion flower have a calming effect, helping to induce sleep, and relieve muscle spasms. Since many ASD children have issues with initiating or maintaining sleep, this herb is well suited if there are sleep problems. Like lemon balm, it is believed that the chemical constituents in passion flower are involved in modulating GABA levels in the brain.

“No significant difference was observed between the two protocols at the end of the trial. Nevertheless, in the Passiflora group, but not in the methylphenidate group, significant effects were observed by week 2 and indicates a rapid onset of action for Passiflora. In addition the substantially lower incidence of decreased appetite and anxiety/nervousness could be an important advantage of Passiflora.”

Valerian or Valeriana officinalis root, has known anxiolytic and sedative effects. The pharmacological constituents in valerian that have the effect on the central nervous system (CNS) are the valepotriates. They affect brain receptors for the gamma-aminobutyric acid (GABA) neurotransmitter by inhibiting the uptake and stimulating the release of GABA, thereby producing a depressant effect in the CNS.

“The category of conduct problems did not improve as significantly as did the other PSQ categories. The presence of the symptoms outlined in this category may indicate the presence of co-morbid conditions such as conduct disorder or oppositional defiant disorder. Valeriana officinalis is not typically indicated for these conditions.”

A French maritime pine bark, Pinus pinaster has been studied in relation to mental health, especially ADHD. Pycnogenol (Horphag, Ltd), is a standardized extract of French maritime pine bark, that has been extensively studied. Pycnogenol is a defined mixture of polyphenols, and a small amount of phenolic acids. It exhibits a number of biological activities, especially antioxidant properties and many different biomodulating activities. The exact mechanism by which Pycnogenol improves brain functions and mental health is not entirely clear.

In one study, 61 children were treated with 1 mg of pine bark extract per kg body weight per day or placebo over a four-week period. Symptoms were measured through self-assessment and external assessment by parents and teacher. The study concluded that:

Relapse of symptoms was observed after the medication with pine bark extract was discontinued. The placebo group revealed no improvements over the treatment period. The authors reported no serious side effects. 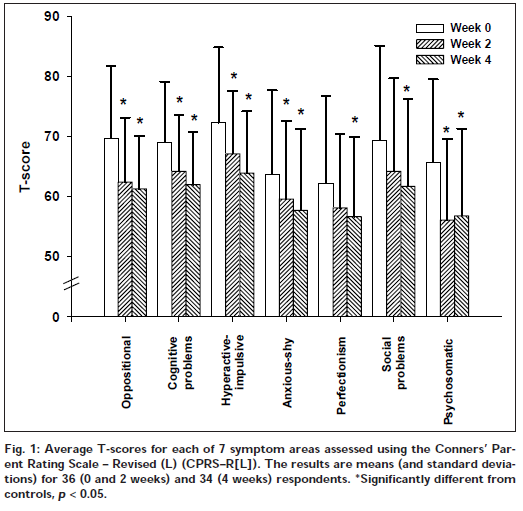 Here we have highlighted just some of the herbs that can be used in treating children with ADHD. The presenting symptoms of a child will determine which herbs may be most beneficial. Other herbs that can also be considered include, chamomile, American ginseng, St John’s wort, Bacopa, baicalin and others. As some of the studies show, herbs can also be used in conjunction with standard methylphenidate (Ritalin) therapy.

Before anyone rushes out to buy herbs online or over the counter, there are huge quality issues when it comes to herbs. Good quality herbs that contain sufficient quantities of the active constituents are not readily available. I have written about quality issues pertaining to herbal products previously (here). There are optimal doses of herbs that should be used. Herbs are available in capsules, tablets, and as liquid extracts. I avoid alcoholic extracts of herbs as much as possible in children, so as to lessen the stress on their livers due to the alcohol content.

I would highly recommend seeking the advice of a practitioner that is well experienced in prescribing herbal products to children.