A new study has looked at why individuals with neurodevelopmental and mental illnesses also have significant underlying medical disorders. What they have found should revolutionise the treatment of neurodevelopmental disorders. There is a strong co-occurrence of non-psychiatric medical issues together with mental health disturbances. Treatment should be focused on the whole person, not just a single diagnosis.

The study, done at the Institute for the Developing Mind, at the children’s hospital in Los Angeles, sheds light on why people with neurodevelopmental and mental illness often have physical disorders. Their study, published online in Frontiers in Psychiatry, should make clinicians and scientists rethink how they approach the treatment and study of neurodevelopmental disorders (NDDs) beyond a single diagnosis. Current care of NDDs and mental disorders focusses solely on the brain aspect of the diagnosis.

NDDs include schizophrenia, autism, bipolar disorder and major depressive disorder. These disorders are associated with abnormalities of brain development due to genetic mutations and affect an estimated 15 percent of the population. The interesting aspect regarding these genes is that nearly all the genes found in the developing brain are also found in other peripheral organs. Sub-groups of risk genes for a particular brain disorder will also affect the development and functioning of peripheral organs.

The study’s analysis of NDDs included syndromic disorders (such as Rett Syndrome and Fragile X), brain-based childhood disorders (ASD and ADHD), or adult-onset disorders (bipolar disorder and schizophrenia). A gene risk for these disorders was compiled and then the genes were further separated into basic organ systems. These organ systems are associated with physical disorders involving the ears, nose and throat, cardiac, respiratory, immunological, craniofacial, neurological and so forth.

The analysis of NDD genes and their psychiatric phenotypes revealed a striking degree of overlap between seemingly unrelated disorders. Of the 208 individual NDD risk genes, approximately half were associated with non-brain based disturbances. The largest of these categories included craniofacial, musculoskeletal, cardiac, genitourinary and endocrine disturbances. Overall, one third of the 208 genes were associated with two or more disorders.

As anyone that knows me, autism research has been my particular area of interest for many years. I have been advocating to anyone that will listen, that sub-sets of ASD children have underlying medical issues that are treatable. This study clearly shows the link between ASD genes and the higher incidence of underlying medical conditions that have been documented in the medical literature for some time now. 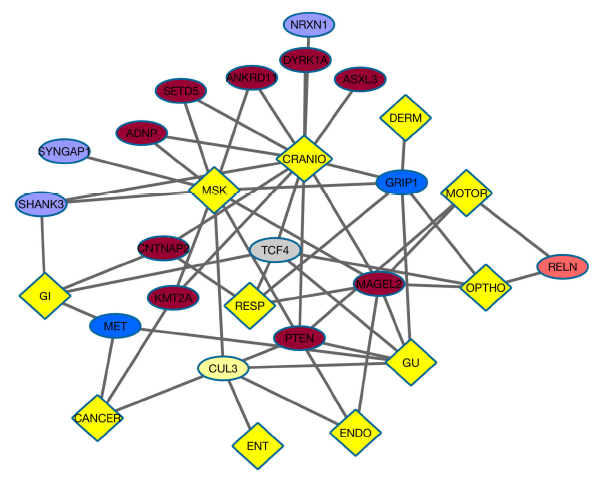 Interestingly, of the eight gastrointestinal ASD risk genes, some like the MET gene regulate the gut nervous system and motility. Others like the CDKL5 gene is associated with not only with ASD risk and early infantile epileptic encephalopathy (seizures), but also gastrointestinal disturbances, sleep disturbances and stereotypic hand movements.

This study adds valuable information to what we already know about ASD, and helps to tie together why ASD children may have so many co-existing medical conditions. It explains the complex health challenges faced by these ASD individuals and their families. It also confirms the strong anecdotal evidence from practitioners and parents, that ASD children, when treated for these underlying medical conditions, have significantly better outcomes than children that do not have a comprehensive medical assessment and just follow mainstream treatment.

Final comments from the authors of the study:

“Thus, as medical genetics evolves, so does the necessity to reduce single gene-single disease boundaries and view a broader pathophysiological impact on other organ systems. The analyses presented here may help reframe how clinicians and scientists approach the treatment and study of neurodevelopmental disorders beyond single conditions.”

There are a number of very important take home messages that the medical community should sit up and take notice from this study. Needless to say, this ground breaking study has received very little attention in the ASD community.

The Genetic Intersection of Neurodevelopmental Disorders and Shared Medical Comorbidities – Relations that Translate from Bench to Bedside.