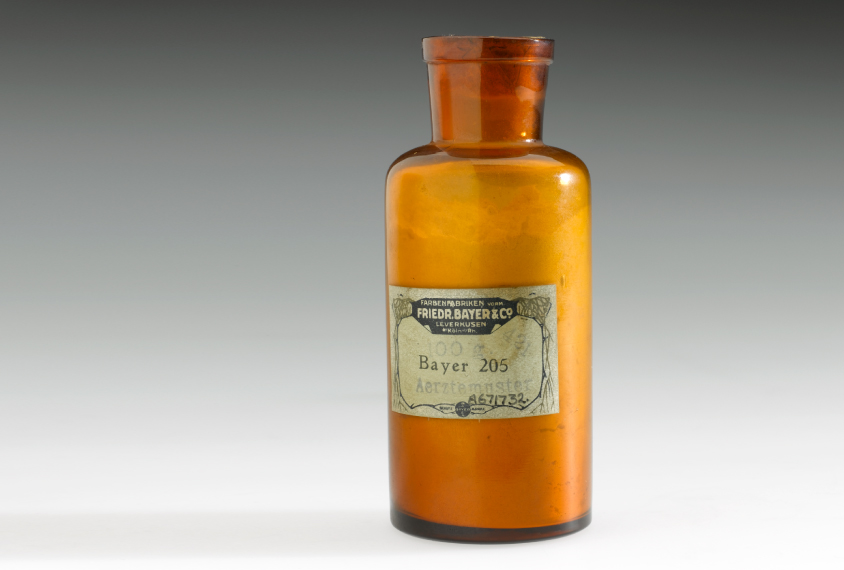 Recently a new drug hit the news and created a huge amount of excitement in the autism community. Will it bring the hope that parents are looking for?

I have been following research into autism for well over 20 years. I have seen the headlines of “cures” and the hopes of parents come and go. Will this new line of therapy go the same way?

Firstly, suramin is not a new drug, it is a drug that has been around for over 100 years! It was developed in 1916 to treat African sleeping sickness. So why the excitement for its potential use in the treatment of autism?

In a 2013 study, a team of researchers lead by Robert Naviaux, injected the drug suramin into 6-month-old mice, that were previously exposed to an infection while in the womb. A single dose of suramin improved the animals’ social behaviors for five weeks. This was followed by another study that suramin improves social behavior in an adult mouse model of autism.

So, what is the rationale for trialing suramin as a potential therapy for autism? Suramin it is believed to block proteins that over-react to infection. Suramin blocks proteins called purinergic receptors on the surface of cells. These receptors ordinarily transmit a ‘danger’ signal when a cell is stressed. The theory is that this cell danger response response may go into overdrive in autism, so blocking these purinergic receptors could restore the cell back to its normal state. This group of researchers hypothesized that “that there is a conserved cellular response to metabolic perturbation or danger that is shared by all children with ASD. This is called the cell danger hypothesis. Aspects of the cell danger response (CDR) are also referred to as the integrated stress response.”

Infections causing fever during certain periods of pregnancy, especially in the second trimester, have been associated with a higher incidence of having a child with autism. In theory suramin may be able to inhibit these over-reacting stress response proteins, decreasing the underlying cause or core symptoms of autism.

Although mice are not identical to humans, as the diagram below shows, 75% of the pathways are shared by mice and humans that suramin may alter. Therefore, we have a good mouse model to do further research into the benefits, and possible adverse effects, of suramin in autism. 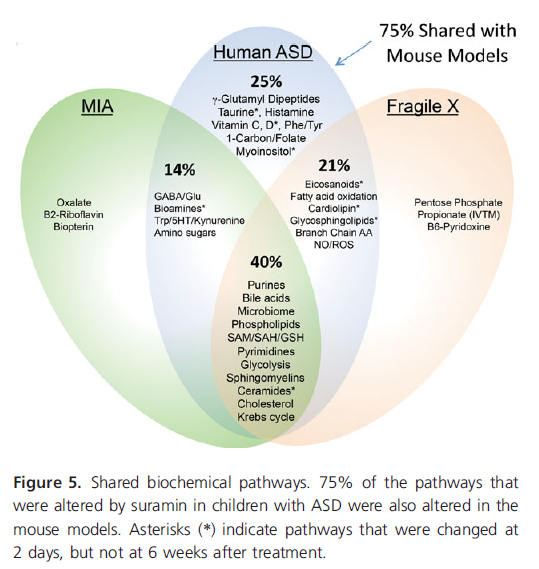 Now to the study that has generated so much interest in the autism community. It was only a small clinical trial of 10 children. The boys, aged 5 to 14 years were matched by age, IQ and autism intensity. The autistic boys were randomized to receive either one intravenous infusion of low-dose suramin or a placebo infusion. Therefore only 5 boys received suramin by infusion. The boys were extensively monitored in the following 6 weeks for suramin blood levels, a panel of blood chemistry, adverse effects and autism-related traits. At one week after the infusion, scores on a battery of autism tests had improved for the five boys in the treatment group but not the five boys in the placebo group.

Whatever the measured outcomes may be from the study design, I always like to read what the parents observed – as this is not always reflected in the study results.

“Parents reported that after suramin treatment, the rate of language, social, behavioral, and developmental improvements continued to increase for 3 weeks, then gradually decreased toward baseline over the next 3 weeks.”

Yes, that is something to get excited about. Rarely do parents see such rapid improvements over a 3-week period in all of the children treated. But we also need to look at the adverse effects. The table below lists the adverse effects seen in the 5 children given the low-dose suramin infusion.

All five children given the suramin infusion “developed a self-limited, evanescent, asymptomatic, fine macular, patchy, morbilliform rash over 1–20% of their body. This peaked 1 day after the infusion and disappeared spontaneously in 2–4 days.”

Therefore, there was a significant list of adverse effects over the 6-week period. We do know that autistic children have compromised biochemistry and detoxification pathways, so we need to be cautious. Even though we are using low doses, children’s ability to deal with pharmaceuticals and toxins is different to adults. The initial research is promising. As always it is a balance between the risk to benefit for the child.

There is no evidence that individuals with autism have an altered stress signalling response, which the study authors hypothesize. This has brought out critics of the study. However, in the “old days” when heavy metal chelation was the rage, 73% of parents found detox (chelation) to benefit their ASD child. Although mainstream medicine reported heavy metal chelation as “dangerous” and killing children, in fact it was “fake” news, which I have discussed here. Whether children were improving due to removal of heavy metals or because most chelating agents are strong antioxidants and correcting oxidative stress in the autistic brain – as a parent, who cares! My child improved in leaps and bounds, that’s good enough for me. So long as it does not harm my child.

The same with suramin. We may not know the exact biochemical pathway by which suramin may work, but 5 children (100%) showed improvement. If adverse effects can be kept to a minimum, further research is warranted. Although this study is encouraging, there is still a lot of work to be done and many years before it is available as a treatment for autism. In the meantime, we continue to heal children through diet, fixing their bowels, correcting nutritional deficiencies and behavioural therapies. Because it is just the logical thing to do.

My only real concern at the moment is that a patent application has been filed for an “antipurinergic therapy”. Anything with a patent means money. Past experience tells us that if money is to be made, there is not the same transparency. Negative trials are not reported, adverse effects are under reported, patients often suffer.

A special note from the authors of the study:

“Suramin is not approved for the treatment of autism. Like many intravenous drugs, when administered improperly by untrained personnel, at the wrong dose and schedule, without careful measurement of drug levels and monitoring for toxicity, suramin can cause harm. Careful clinical trials will be needed over several years at several sites to learn how to use low-dose suramin safely in autism, and to identify drug–drug interactions and rare side effects that cannot currently be predicted. We strongly caution against the unauthorized use of suramin.”

Finally, the 10 parents that allowed their children to be involved in the study should be commended. As always autism parents are the pioneers in any autism treatments that push the boundaries of treatment options that may make a difference to all autistic children.