The Fruit, Vegetable and Diet Score Report, produced by the CSIRO and commissioned by Horticulture Innovation Australia, compiled the dietary habits of adults across Australia over an 18-month period.  With 145,975 participants nationwide, this survey is the largest of its kind ever conducted in Australia.

People across Australia, in all occupations and weight ranges, were invited to participate in the online survey between May 2015 and October 2016. CSIRO researchers analysed this data to develop a comprehensive picture of the country’s fruit and vegetable consumption. 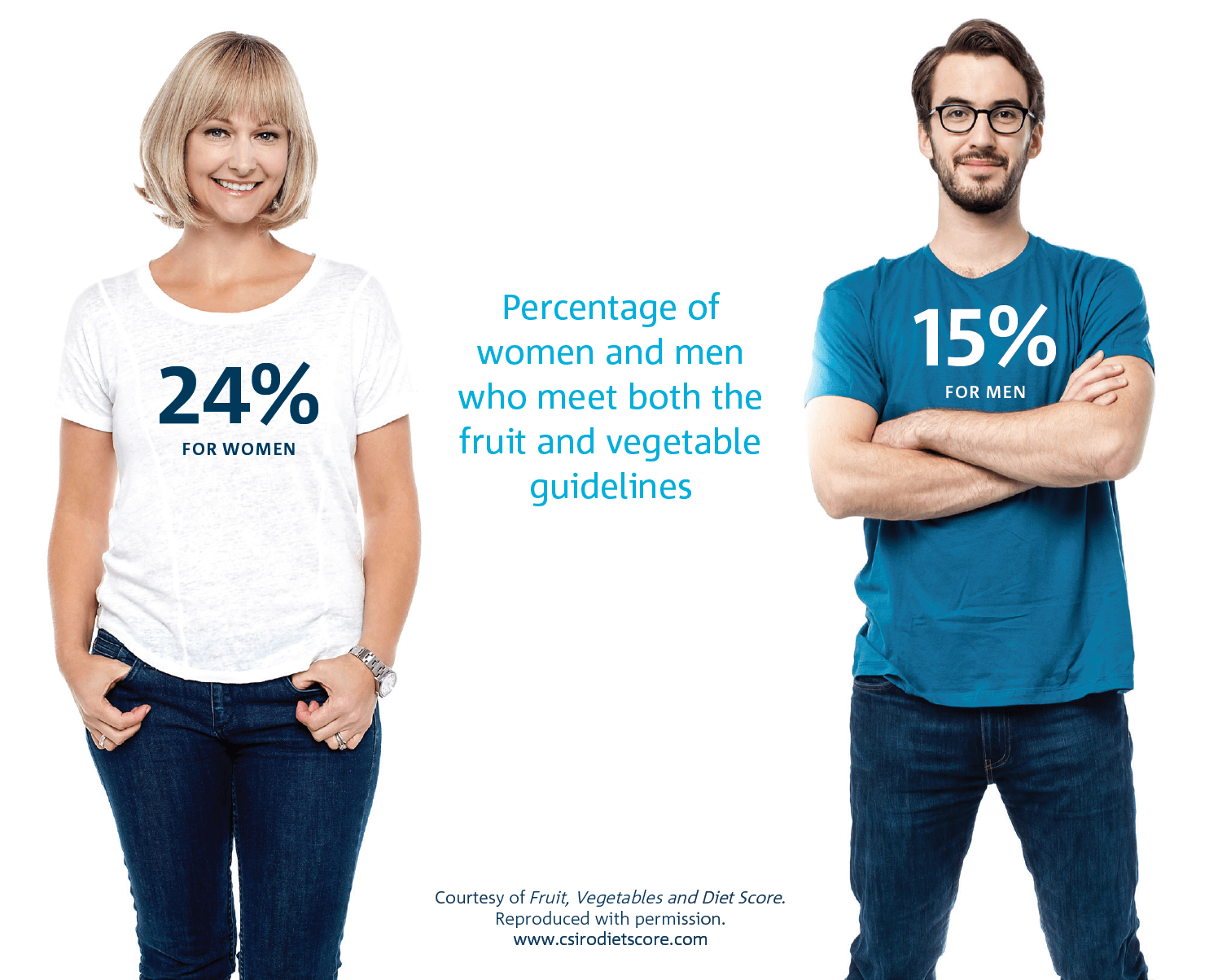 When comparing the figures by occupation, construction workers and those in the science and programming sector recorded the poorest fruit and vegetable eating habits. On the other hand, retirees and health industry workers were more likely to meet the recommended dietary guidelines.

“Increasing the amount of fruit and vegetables we eat is one of the simplest ways Australians can improve their health and wellbeing today as well as combat the growing rates of obesity and lifestyle diseases such as heart disease, Type 2 diabetes and a third of all cancers,” explained Professor Noakes, CSIRO Research Director and co-author of the CSIRO Total Wellbeing Diet.

The Australian Bureau of Statistics published the “National Health Survey: First Results, 2014-15“, which gives us an insight as to how much fruit and vegetables Australian children are eating.

Parents that are looking at gluten free/casein free, GAPS, Paleo and other diets for their children, are continuously criticised for putting their children at risk for nutritional deficiencies and some diets are considered as ‘dangerous’ for growing children if they put their child on one of these diets.

I agree that if you simply take a child that is on a ‘junk’ processed food diet and simply replace it with a ‘junk’ processed gluten/casein free diet, you are most likely doing more harm than good. However, the reality is that parents that are passionate about giving their child the best start in life are trying to increase their child’s nutrient intake by expanding the range of fruits and vegetables they eat, and trying to maintain a healthy gut flora with high fibre and fermented foods.

Those criticised for following a Paleo diet are warned that they are missing out on vital nutrients as they are removing grains from their diet. If we weigh up a diet high in grains, primarily from refined grains in the Western diet, to a diet high in fruit and vegetables as well as cultured foods, you don’t need to be a nutritional scientist to guess which one comes up on top.

Why are these same critics not warning that 80% of the Australian population is in danger of health-related issues as they are failing to get the health benefits from eating sufficient fruit and vegetables?

If we actually did a comprehensive independent study to check the nutritional status of Australian children, it would be a sad report to read. Practitioners like myself who deal with children, see nutritional deficiencies constantly and the medical and mental outcomes of these deficiencies. Deficiencies and disorders like anaemia, metabolic syndrome, anxiety, aggression and depression are common. Yes, we can supplement them, worse still medicate them, however how does this help with the long-term well-being of the individual?

Teach them to eat better and you set their health up for life.

So, when you go to your paediatrician with concerns about your child’s picky eating and are told – he looks healthy and is tracking well on the growth and weight charts – don’t worry about it! No, we don’t need to do any testing to confirm this. Or.. We don’t want to put “him” through the trauma of a blood draw.

Logically – does this make any sense to an intelligent person?

Logically a child on a diet of:

How can you NOT be concerned that a growing child – who has high nutritional needs – is not getting sufficient nutrients? Are they sucking the nutrients they need out of the air?

My final piece of logic. So,

I was going to conclude that – “the majority of adults and children’s future health and wellbeing is stuffed!”

However, in the climate of political correctness let me rephrase that. It is never too late to change how we eat. The earlier in life we make these changes, the quicker we see results (as The First Critical 1000 Days of Life article points out). We can still make changes as we get older, but it will take longer to see the benefits.

Arguing that people who are concerned about their current diet, are risking their health by following an alternative diet, does not make sense. Especially, since 80% are not following the critics recommendations! AND the emphasis on low-fat is clearly not working, given Australia’s newest epidemic – 11.2 million Australians are overweight or obese.