There is accumulating evidence that the imbalance between the abundance of beneficial and harmful organisms, or dysbiosis, contributes to the development of chronic diseases such as obesity, type 2 diabetes, inflammatory bowel disease, and cancer. Increased hygiene, dietary changes, reductions in physical activity, and increased antibiotic use have contributed to decreased diversity in our gut microbiota.

Microbial changes in the gut can be achieved through diet and exercise. Recent evidence is showing that exercise can enhance microbial diversity in the presence of a high-fat diet (HFD), prevent weight gain, and improve body composition as indicated by a decrease in fat mass. The effects of exercise are not limited to increasing diversity. It is also known that exercise reduces inflammatory mediators, increase antioxidant enzymes, and decrease tumour necrosis factor (TNF)-α expression in intestinal lymphocytes. But wait there is more! Exercise can prevent morphological changes in intestinal villi, regulate tight-junction proteins, and increase butyrate production (utilised by the colonic cells for growth and repair). 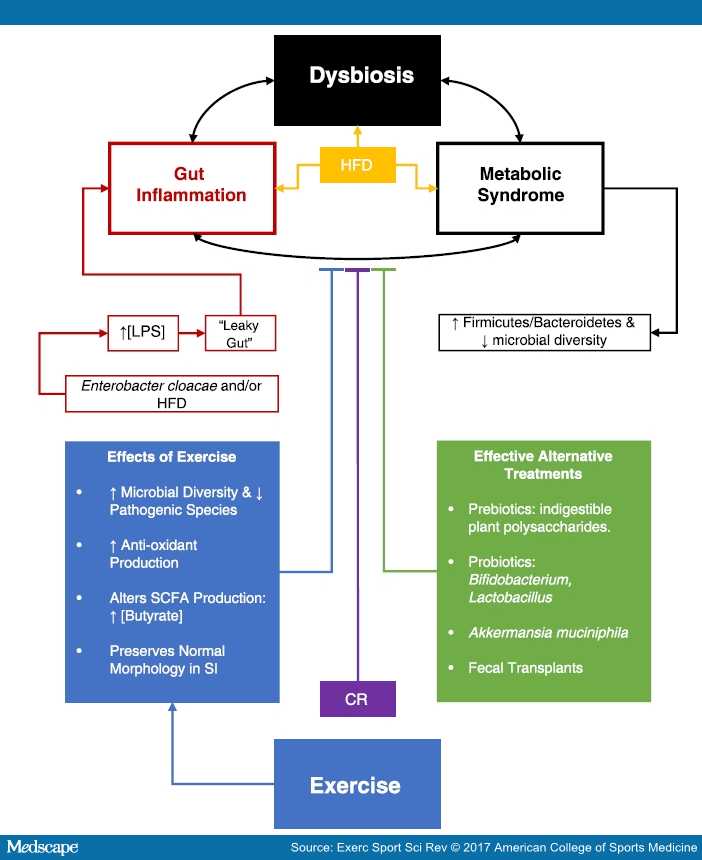 Imbalances in the gut microbiota are associated with metabolic syndrome and gut inflammation. As shown above, changes in microbial composition further contribute to the progression of these chronic conditions in which all seem to exacerbate one another (double-sided arrow) once established. Specifically, a high-fat diet (HFD) in combination with a lack of physical activity results in (single-sided arrow) the onset of metabolic syndrome, dysbiosis, and gut inflammation through lipopolysacharride (LPS) infiltration. Dietary interventions, such as calorie restriction (CR), have shown to not only improve longevity, but attenuate or reverse (T arrow) the co-occurring metabolic changes and microbial imbalances associated with this cycle of dysbiosis, gut inflammation and metabolic syndrome.

Outside of diet, there are few factors that can influence a range of physiological factors like exercise can. How exercise exerts its effect on the gut microbiota is still not entirely clear. What we do know is that exercise does produce a more diverse gut microbiota with an increase in beneficial bacteria and a decrease in pathogenic bacterial species, and in turn enhances exercise performance. In animal studies, it has been found that exercise increased a number of butyrate-producing bacteria and colonic butyrate concentrations, respectively. Overall the animal findings suggest a few things: 1) exercise does seem to benefit butyrate levels in exercising animals, 2) exercise also produces a unique microbiota, and 3) the type of exercise will affect the diversity of the gut microbiota.

So how does this translate to humans? To date, there has been one study that has looked at exercise in humans and its influence on the microbiota and one proposed protocol examining exercise and a low-carbohydrate diet on prediabetic nonalcoholic fatty liver disease in postmenopausal women and middle-aged men. The first study examined professional rugby players and compared them with high and low body mass index (BMI) sedentary counterparts. Stool samples were analysed and the results clearly show that the gut microbiota of elite athletes is more diverse than that of controls. Several taxa were significantly higher in the athletes including Ruminococcaceae, Succinivibrionaceae, Succinivibrio, Prevotellaceae, and Akkermansiaceae. However, the athletes’ protein consumption was higher than controls, therefore was it the increased protein intake that was driving the microbial diversity seen in athletes? Conversely, an increase in muscle mass as a result of exercise training, may be a factor influencing the microbiota as the host requires more fuel to keep those muscles working optimally. So there is a selection of bacteria to help the host maintain their muscle mass.

The study looked at athletes whose age ranged mostly between 23 to 35 years. So the question is whether these changes would be seen in older athletes or can exercise influence the microbiota as we age? there seems to be one animal study that looked at this and concluded that exercise is more effective at altering the microbiota in younger, not older, animals.

Obesity and other inflammatory-based diseases are often linked to an HFD and lack of exercise. To date, studies examining the interaction between HFD and exercise agree that exercise can induce a unique and diverse microbiota. Animal studies are difficult to compare as different methodologies are being used in the studies, although the overall results suggest that exercise has a robust impact on microbial diversity.

Although most experimental questions have focused on how exercise influences the microbiota, it is interesting to note that exercise performance is strongly influenced by the microbiota itself. In an interesting animal study, researchers compared germ free mice (GF), GF mice colonised with Bacteroides fragilis (BF) only and specific pathogen-free (SPF) mice, which are simply animals with a normal microbiota but lack pathogenic bacteria. Their results showed that having one bacterium (BF) was better for exercise than having none (GF), but that having a complete microbiota (SPF) was best. Specifically, in the times to exhaustion for SPF, GF, and BF were 39.0, and 67.2 and 81.6 min, respectively. The authors concluded that different microbiota status affects exercise performance.