What’s so special about methylation?

Methylation is being talked about a lot in medical research, as well as in many discussion groups from chemical sensitivity to chronic fatigue and autism. Methylation is a biochemical process in the human body that is critical for some very important functions including: DNA methylation (turning genes on/off), neurotransmitter production, homocysteine metabolism, protein methylation, and liver detoxification. Inadequate methylation capacity can lead to birth defects, depression, cognitive decline, and cancer. Impaired methylation has also been shown to be associated with autism.

Methylation is not just one specific reaction, there are hundreds of methylation reactions in the body. Methylation is simply the adding or removal of a methyl group to a compound or other element. The methylation cycle is the backbone of how we are able to function. The effectiveness of the methylation cycle determines how well our body deals with detoxification, immune function, DNA maintenance, energy production, mood balance and controls inflammation.

All these processes help the body respond to environmental stressors, to detoxify, and to adapt and rebuild. That’s why lowered methylation function may contribute to many, major chronic conditions, as listed below. 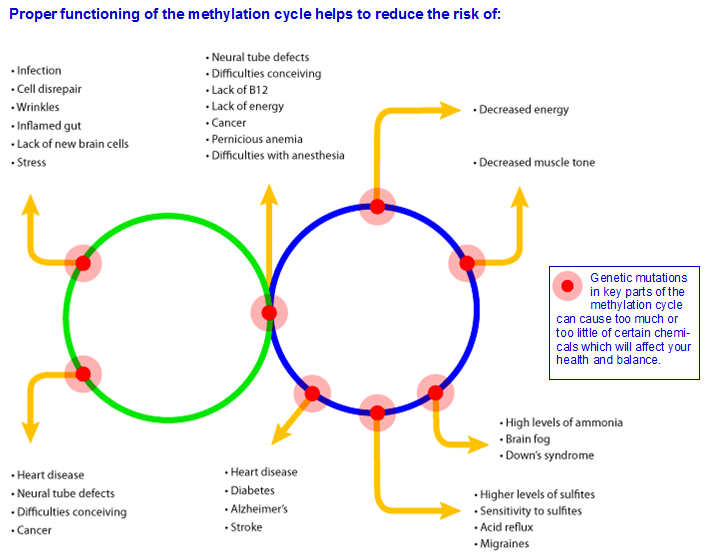 In general, when some compounds receive a methyl group, this “starts” a reaction (such as turning a gene on or activating an enzyme). When the methyl group is “lost” or removed, the reaction stops (or a gene is turned off or the enzyme is deactivated). Methylation is involved in almost every bodily biochemical reaction, and occurs billions of times every second in our cells. That’s why figuring out where the methylation cycle can be improved will contribute to improvement in health, and reduce an individual’s symptoms.

The biochemistry involved is complicated, but suffice to say, a defect at any one point in these interlocking metabolic cycles will inevitably affect the  remaining pathways, and your overall health will then suffer. Methylation abnormalities may explain why one person can be sick from environmental toxins while another is just fine. Why one child is autistic while their fraternal twin brother is not. While a person’s DNA cannot be changed, if we know where your weak links occur, we can create “nutritional by-passes” – we can supplement alternative pathways or restrict dietary molecules that you cannot process effectively. Below is a simple diagram of the biochemical pathways that are intermeshed and how a problem in the methylation cycle or other cycles, will affect how well your individual biochemistry works, ultimately determining how you feel, or what you may be susceptible to. 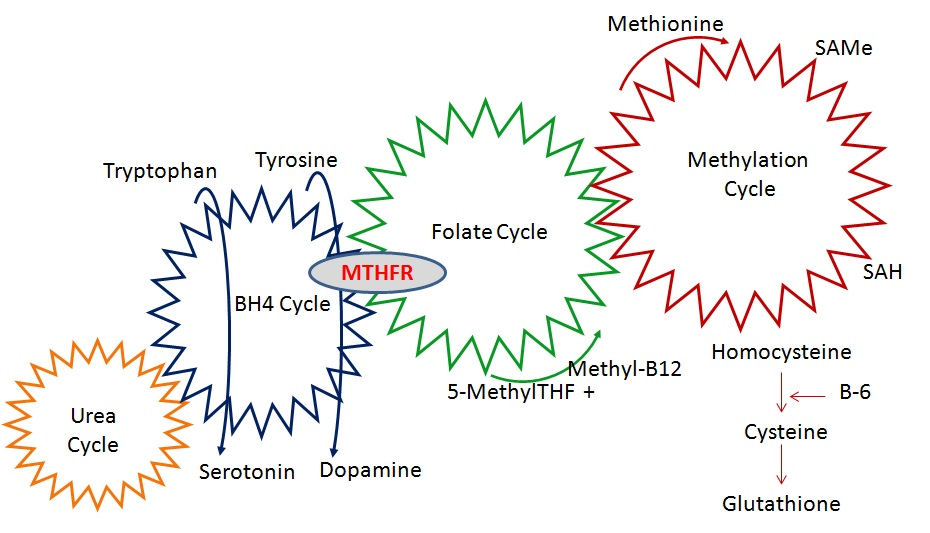 Consequences of genetic weaknesses (mutations) or nutritional deficiencies in the methylation pathway are increased risk factors leading to a number of serious health conditions (see below). This does not mean that every individual will have one of the health conditions listed below. Most health conditions in society today are multifactorial, there is an underlying genetically determined risk that requires a significant infectious or environmental “trigger” to initiate the process. Appropriate supplementation with vitamins and nutrients may be effective in by-passing these mutations to allow for restored function of the methylation pathway. 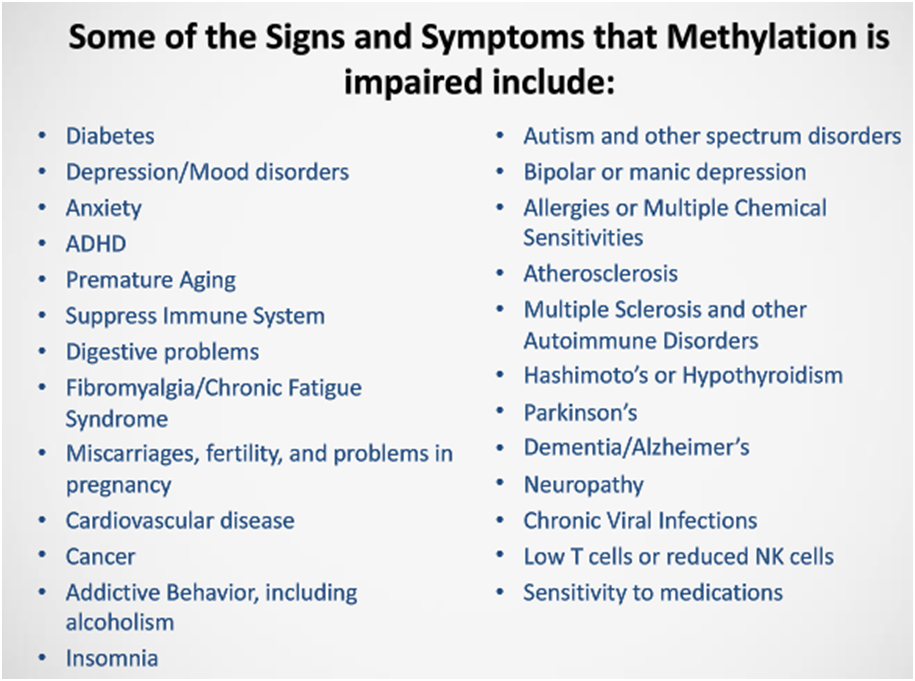 How do we test for methylation status?

Genetic tests look for single nucleotide polymorphisms or SNPs that alter the genes enough to affect certain biochemical processes, such as, methionine metabolism, detoxification, hormone imbalances, and folate metabolism. These are often incorporated into personalised genetic profile testing or testing for specific SNPs, like the MTHFR gene test. With some of these gene tests it is important to be aware that although this is your genetic predisposition, often there are environmental triggers that need to be identified and either eliminated or treated, rather than just supporting the genetic weakness.  These tests may be done via blood or saliva (depending on the SNPs being tested for).

To see how effectively the methylation pathway is working, blood tests are available that measure individual metabolites in the pathway. For example some of these metabolites include:

Simple blood work via a general pathology laboratory can also be useful. Tests for homocysteine, folate, vitamin B12, histamine, basophils, etc., can be useful indicators. Sometimes starting with the simple tests before doing very specific testing is a good way to go.

If environmental triggers are suspected then specific testing for heavy metals, environmental pollutants, infections and inflammatory markers should be considered.

Testing for pyrroluria may be useful as this condition depletes vitamin B6 and zinc.

How to get tested?

We can organise the MTHFR gene test which can be done via a blood test or even simpler, for children a swab from within the inner cheek of the mouth can be done. A simple and cheap test, yet the results may have a very profound impact on you or your child’s wellbeing. If you are having blood work done for any reason, why not ask for some additional tests to be added on. Contact us if you need advice as to which tests would be most suitable for you.

This article is an extract of a more comprehensive explanation that can be accessed here.