Recently the ABC’s Four Corners program aired an episode questioning the efficacy and safety of supplements available in Australia. This brought a barrage of criticism from many quarters of the complimentary medicine industry. However there needs to be some rational discussion regarding supplements, which both sides need to acknowledge.

The Four Corners program ran an episode recently, ‘Swallowing it: How Australians are spending billions on unproven vitamins and supplements’. The focus of the program was on the lack of evidence and efficacy of natural medicines as well as poor compliance to TGA standards by manufacturers of natural medicines. Thereby questioning the safety and regulation of the industry.

The Four Corners episode also questioned the compliance to TGA requirements for manufacturing of supplements and how this may pose a safety risk to the consumer. In fact, Australia has some of the highest and most vigilantly monitored standards for supplements in the world.  In Australia, supplement manufacturing companies are regulated to the same degree as medicines.  Adverse events are recorded and monitored by the TGA in the same way prescription medicines are. Company manufacturing facilities are required to meet audit standards which are the same as pharmaceutical standards. Recent media reports regarding product safety typically involve products or ingredients that are not approved by the TGA and are being imported directly by either retailers or consumers.

I don’t have a problem with the supplement industry being more tightly regulated. I do believe that there are many supplements that I would consider to be inferior, that line supermarket and pharmacy shelves.

The most expensive vitamin is one that does not work!

I have written previously about the quality of supplements that are available on supermarket and pharmacy shelves. Many companies say that they are manufacture supplements to TGA standards. However, unless they can show me data to verify:

then I am not happy to use the product either for myself, let alone my patients.

Don’t believe that the problem of poor manufacturing is isolated to the supplement industry. The US Food and Drug Association (FDA) who audits overseas manufacturers that supply pharmaceuticals to the US market, found:

“The problems FDA investigators encounter in India are similar to those seen around the world in manufacturing,” according to an FDA representative. For example, in the last year, the FDA has sent warning letters about manufacturing or packaging violations not only to companies with plants in India, but also to companies operating plants in Australia, Austria, Canada, China, Germany, Japan, Ireland, and Spain. Common issues include inadequate testing and quality checks, inconsistencies in data collection, and contaminated products.”

To argue that all supplements are useless, and just “expensive wee”, is ridiculous. If you test and find that an individual is lacking a particular nutrient, be it iron, folate, coenzyme Q10, vitamin D, or whatever. Then not supplying them with the nutrient that they are deficient in is negligent. Supplying them with adequate levels of the most active and absorbable supplement will make the biggest difference. Supplying them with low levels of a poor-quality supplement that is poorly absorbed, or unable to be converted to its active form, will make little difference. And yes, ends up being “expensive wee”.

Take for example the foresight of this doctor, who recently discovered scurvy (lack of vitamin C) in her diabetic patients in Sydney. She reported her findings in November 2016, in the international journal, Diabetic Medicine.

It appears scurvy, a historical disease caused by a lack of vitamin C and generally associated with old-world sailors on long voyages, is making a surprise comeback in Australia, due to poor modern dietary habits.

Clinician-researcher Professor Jenny Gunton heads the Diabetes Centre at Westmead Hospital and investigated whether a vitamin C deficiency was behind one of her patient’s unhealed wounds.

“She just did not have a reason not to heal her ulcers and they’d been there for seven months and that’s just not right,” Professor Gunton said.

“When something doesn’t add up you go and look for the unusual causes … so it all started with that.

We are also told that supplements are dangerous. If you click on the link below, it will take you to an interesting   infographic, Societal vs Individual Risk of Death in Australia, which is self-explanatory. 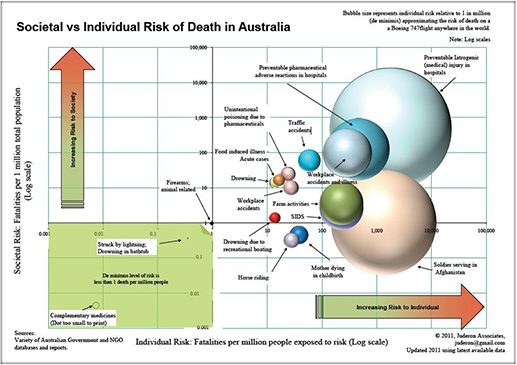 In the end whether we are talking about pharmaceuticals or supplement manufacturing, there will always the rogue operators, as it is a billion-dollar industry and very lucrative. Therefore get advice about which supplement manufacturers have a proven track record when it comes to manufacturing and supplying supplements. Buying simply on the cheapest price, may well turn out to be an expensive and futile exercise to feel better.