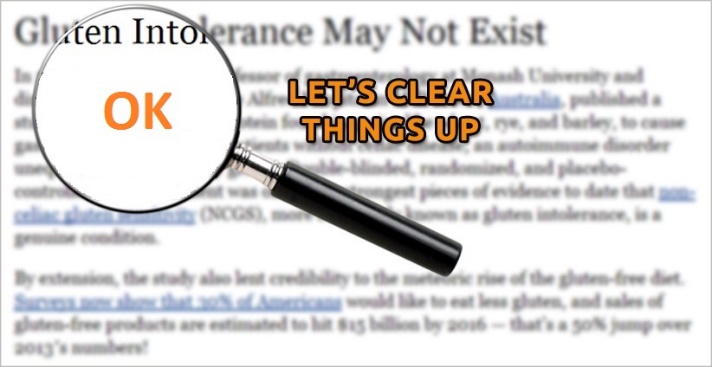 A new study may explain why people who do not have celiac disease or wheat allergy, experience a variety of gastrointestinal and extra-intestinal symptoms after ingesting wheat and related cereals.

Gluten sensitivity is increasingly becoming a real medical issue, and not a figment of the gluten-free craze, a new study contends. The study was led by researchers from Columbia University Medical Center (CUMC), and reported in the journal Gut. Some people suffer changes after eating gluten that are separate and distinct from those that accompany either coeliac disease or wheat allergy. Between 0.5 percent and 6 percent of the general population are estimated to have non-celiac wheat sensitivity (NCWS), although a lack of good diagnostic tools has hampered efforts to come up with a solid and accurate estimate.

The results suggest that people with non-coeliac wheat sensitivity suffer from a severe immune reaction because microbes and food particles can seep through their weakened intestinal barrier and into their bloodstream. Interestingly, this migration of microbes and food particles does not occur with coeliac disease, despite the damage done to the intestine by the disorder.

Despite the extensive intestinal damage associated with coeliac disease, blood markers of innate systemic immune activation were not elevated in the coeliac disease group. This suggests that the intestinal immune response in coeliac patients is able to neutralise microbes or microbial components that may pass through the damaged intestinal barrier, thereby preventing a systemic inflammatory response against highly immune-stimulatory molecules.

The non-coeliac wheat sensitivity group was markedly different. They did not have the intestinal cytotoxic T cells seen in coeliac patients, but they did have a marker of intestinal cellular damage that correlated with serologic markers of acute systemic immune activation. The results suggest that the identified systemic immune activation in non-coeliac wheat sensitivity is linked to increased translocation of microbial and dietary components from the gut into circulation, in part due to intestinal cell damage and weakening of the intestinal barrier.

A systemic immune activation model would be consistent with the generally rapid onset of the reported symptoms in people with non-coeliac wheat sensitivity.

Non-coeliac wheat sensitivity patients who followed a diet that excluded wheat and related cereals for six months were able to normalise their levels of immune activation and intestinal cell damage markers. These changes were associated with significant improvement in both intestinal and non-intestinal symptoms, as reported by the patients in detailed questionnaires.

Considering the large number of people affected by the condition and its significant negative health impact on patients, this is an important area of research that deserves much more attention. In future studies of non-coeliac wheat sensitivity, Dr. Alaedini and his team plan to investigate the mechanisms responsible for triggering the intestinal damage and breach of the epithelial barrier and to further characterise the immune cell responses.