Just as I thought that I had said all I wanted to say on the subject of supplements, a Medscape News item pops into my mailbox. This time it is a commentary by Dr Gerald Chodak who has done a number of commentaries on supplements and prostate cancer in the past. In this case he was commenting on a study that looked at men with prostate cancer that were reported as taking supplements (in general) and cancer-specific survival at 5 years. The finding was that there was no significant difference in outcomes and the lead author made a statement that “the supplements were junk and their study supports that conclusion”. At this point I expected the usual tirade from Dr Chodak about supplements being useless and a waste of time.

Instead, to my surprise, he pointed to a report of a recent analysis in New York, that found that a lot of the supplements claiming to contain certain ingredients, in fact, don’t contain either the amount or the specific item that has been mentioned. Further to this he made the very valid point of how can you judge the effectiveness of any supplement in a scientific trial, if you do not have the evidence of the quality and quantity of the active ingredient in the supplement used in the trial. A very valid point. This also lead into a story in the New York Times newspaper (Feb 3, 2015), which reported on an investigation into over the counter supplements by the New York State Attorney General’s office. The Attorney General authorized an analysis of a number of nutritional and herbal supplements sold at GNC, Target, Walgreens, and Walmart. This analysis found that the products usually did not contain the product listed on the bottle or they contained fillers or other contaminants that were not listed as ingredients.

So what did the tests actually find in the over the counter (OTC) supplements?

The authorities conducted tests on 78 of the “top-selling’ store brands of herbal supplements and found that four of the products did not contain any of the herbs on their labels. Among the attorney general’s findings was: 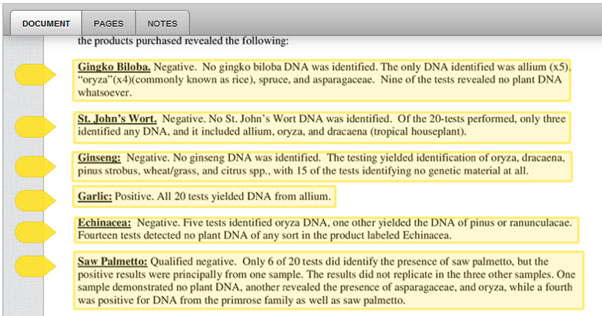 In a 2013 study Canadian researchers, using a test called DNA barcoding, a kind of genetic fingerprinting, tested 44 bottles of popular supplements sold by 12 companies. They found that many were not what they claimed to be, and that pills labelled as popular herbs were often diluted — or replaced entirely — by cheap fillers like soybean, wheat and rice. Among their findings were: 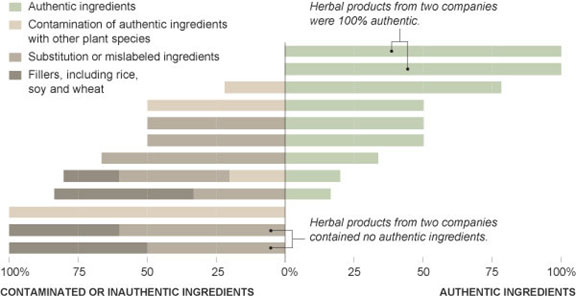 What about here in Australia?

There is no mandatory testing of supplements in Australia. Unless the consumer is buying supplements from a reputable source, one can only assume that the quality of supplements on the Australian market are no different to those in other countries. A Today Tonight segment in 2008, found that 70% of Australians buy nutritional supplements, spending on average $200 per year. This equated to $2.3 billion in 2008. There is a lot of money to be made from supplements from unscrupulous operators. I have found it interesting to see when a new supplement  is marketed to healthcare professionals as a “practitioner only” product, how in a relatively short time “equivalent” products hit retail shelves. Krill oil became very popular not so long ago. At the time we were told that it was not from a sustainable source as there was a concern of overharvesting the krill. It was expensive at roughly $1/capsule. Now the shelves are filled with cheap krill oil supplements. I often question where these cheap products are coming from, or indeed what is actually inside the supplement.

In January 2015, a paper was published in the European Journal of Nutrition, A quality dietary supplement: before you start and after it’s marketed—a conference report. It is worth noting that two of the authors listed on the paper are from Australian companies that manufacturer supplements for the Australian market.  Henry Osiecki from Bioconcepts and Lesly Braun from Blackmores Institute. I have included this paper for completeness for those that would like to have some insight into the supplement manufacturing process.

Reputable companies invest a lot of time and money in ensuring their products are of exceptional quality. If you think about it, paying for a product you are confident that contains the ingredients as listed on the bottle, is much cheaper than paying for something that is not even in the product you have just purchased! You may have just purchased an expensive bottle of fillers at best, at worst maybe something that may make you feel worse.

Also some companies that are supplying practitioner only products to professionals are beginning to use “ghost” consumers to test practitioners practices to ensure they are on selling products to the general public, in contravention to the companies policy. I have had a number of people contact me either by phone or email requesting to purchase supplements, which I suspect may be some companies checking to see if I am selling supplements contrary to their policy.