Do you ever see shapes, lights, or colours, even though there is nothing really there? These were the type of questions asked of adults with autism spectrum disorder (ASD). A surprising high percentage of ASD adults answered yes to these questions.

The researchers used the Cardiff Anomalous Perceptions Scale (CAPS). The CAPS is a 32-item questionnaire that asks participants to indicate whether or not they experience a range of anomalous and out of body experiences, and to rate how intrusive and distressing these experiences are.

Other questions focused on strange or distorted perceptions, such as “Do you ever experience unusual burning sensations or other strange feelings in or on your body?” and “Do you ever hear your own thoughts spoken aloud in your head, so that someone near might be able to hear them?” Three times more adults with autism than typical adults responded yes to both of these questions, indicating that the finding doesn’t just reflect more sensitive perception. 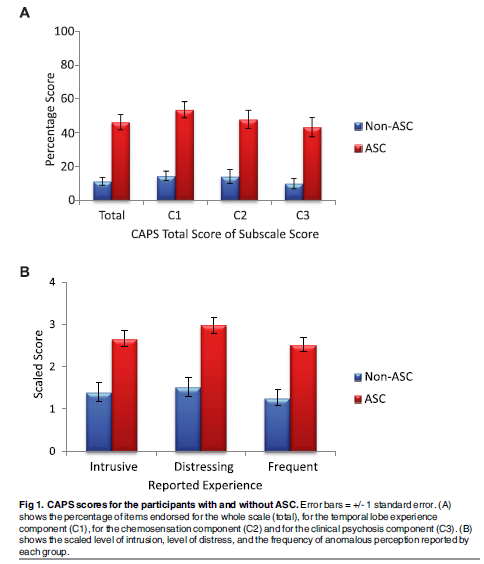 Although we know that ASD individuals experience increased sensitivity to noise and visual stimuli, hallucinatory-type experiences in autism is a new and important finding. We know that other conditions like migraine, epilepsy and schizophrenia are associated with hallucinations and strange perceptions, and there is an overlap with ASD.

It is also an important finding that these experiences are much more distressing in ASD individuals. In future consideration needs to be given as to what can be done to limit this distress. Medical professionals need to be educated to ask ASD individuals about unusual perceptions. This research suggests that this could be an important area to discuss in the clinic setting, so that ASD individuals can be given help when it happens.