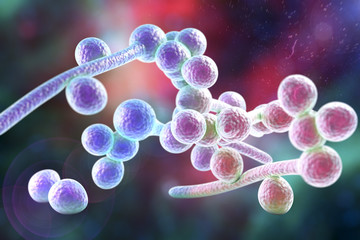 It is believed that exposure to infectious organisms such as viruses or parasites during critical stages of neurodevelopment may confer damage to the central nervous system, thus resulting in the onset of behavioural anomalies and psychiatric disorders during adulthood. It has been previously shown that toxoplasmosis infection can trigger schizophrenia, and this could lead to neurocognitive problems. The organism that causes toxoplasmosis is a parasite that uses cats as its primary host, but it can also infect humans and other mammals.

Researchers from John Hopkins University School of Medicine, released results of an interesting study into the possible role of yeast, Candida albicans, in schizophrenia and bipolar disorder. Interestingly, it was prompted in part by suggestions from patients with a mental illness! Patients and parents of patients shared personal stories and testimonials with the researchers about their experience with yeast infections, and these discussions prompted the investigation into possible links between mental illness and the microbiome — the body’s natural collection of bacteria. The researchers chose to focus on Candida because it is one of the most common types of yeast in the body.

Candida albicans is a yeast like fungus naturally found in small amounts in the human digestive tract, but its overgrowth causes burning, itching symptoms, thrush (rashes in the throat or mouth) in infants and those with weakened immune systems, and genital yeast infections in men and women. In its more serious forms, it can enter the bloodstream. In most people, the body’s own healthy bacteria and functioning immune system prevent its overgrowth. Recent new evidence suggests a possible association between Candida susceptibility and mental illness suggesting that schizophrenia may be related to problems with the immune system. As some people with weakened immune systems are more susceptible to fungal infections, they may also be at higher risk of mental illness.

The researchers used blood samples to quantify the amount of IgG antibodies to Candida, which indicates a past infection with the yeast. To determine whether infection with Candida affected any neurological responses, all participants in the new study took a 30-minute assessment of cognitive tasks to measure immediate memory, delayed memory, attention skills, use of language and visual-spatial skills.

Interestingly, they found no connection between the presence of Candida antibodies and mental illness overall in the total group. But when the investigators looked only at men, they found 26 percent of those with schizophrenia had Candida antibodies, compared to 14 percent of the control males. Men with bipolar disorder had clear increases in Candida as well, with a 26.4 percent infection rate, compared to only 14 percent in male controls.

The researchers plan to take their studies of the gut-brain connection into mouse models to test for a cause and effect relationship with Candida and memory deficits. They emphasize that the current study design had limitations. For example, they were unable to tell where in the body the infection was located and whether or not participants had a current or past infection of Candida. The researchers were also not able to account for every possible lifestyle variable that might contribute to these results.

This study is interesting in two respects. One is that it was driven by patients and parents of patients, who obviously have made the connection between yeast infections and mood disorders. Secondly, in the absence of having easy access to Candida IgG antibody testing, we have an Organic Acid Test available that not only looks at the presence of Candida, but also other yeast species. Therefore it is a useful test to include for anyone with a mood disorder, not only for the yeast markers, but also for the serotonin and dopamine neurotransmitter markers as well.